The bond between horse and human is strong. 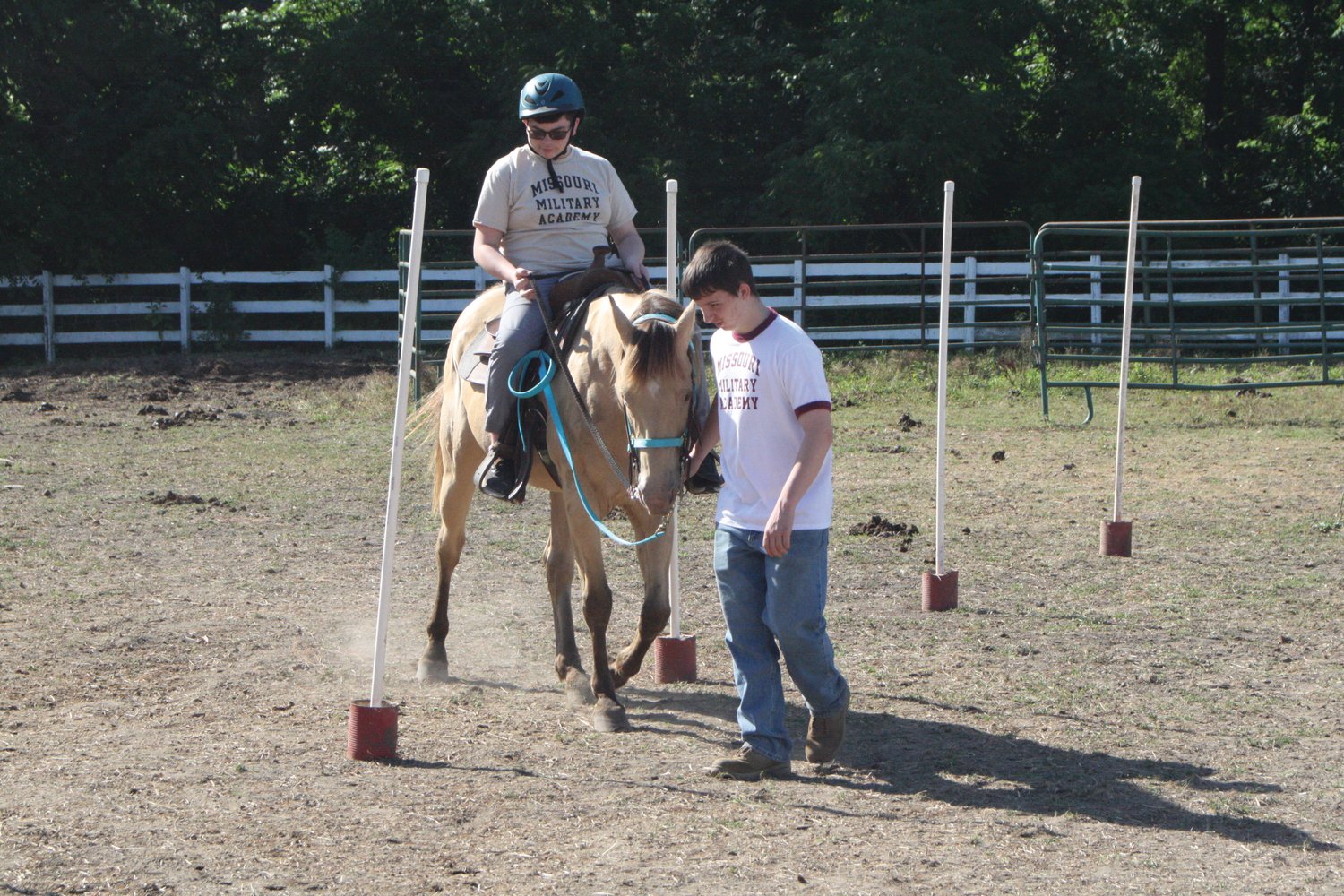 Campers at the Missouri Military Academy equestrian camp maneuver around poles while on their horses on June 29. Before hitting the trail, campers saddled their horses and did some work to test their control.
Jeremy Jacob Photo
Posted Wednesday, July 6, 2022 10:20 am
By Jeremy Jacob, Sports Editor

The bond between horse and human is strong.

That’s what Missouri Military Academy equestrian director Christy Nowlin has noticed over the years and during the sessions of the academy’s camp for children ages 8-18. The camp began its third year last week, with plans to run two-and-half hour sessions starting at 8 a.m. on four days for three weeks.

Nowlin, who has served as MMA’s equestrian director since 2018, said she had to add the third week this year because of the level interest shown by the children.

“I absolutely love working with these kids,” Nowlin said. “I like seeing their passion for, not only learning how to ride, but they bond with the horses. Several of these kids that came last year were like, ‘We want the same horse we had last year. We love that horse.’”

The six or seven children Nowlin works with per week learn a variety of things when it comes to horses. Of course, they do some riding behind the stables, located behind the football field on MMA’s 288-acre land, going on the trail, through creeks and over the hills. There is more than that, though.

Nowlin said the children have to learn early how to groom, saddle and feed the horses because there is a responsibility to another living thing when it comes to riding.

“The grooming, we need to do just to get all the dust and particles off the horses because if you were to put a saddle pad the horse and it rubs, it can make them buck or cause them to have sores,” Nowlin said. “It’s very important for them to learn the proper care of the horses. If they don’t, that can harm the animal or yourself.”

Nowlin said hoof care for the horses is done every six weeks, and she shows them what must be done with horse that wear shoes as opposed to those who don’t wear them.

Riding horse is a fun activity, Nowlin said she has experienced in her 40 years of stable managing and 20 years of trail riding. However, it is not all “fun and games” as the work that must be done helps in the bonding process between animal and camper.

“They have to do all that,” Nowlin said. “They do have to clean up after the horse in their stalls every day.”

Nowlin said she is grateful for the children going home to various spots, such as St. Louis and Kansas City, and spreading word of the camp to their friends. She believes this has much to do with the increased interest in the camp this year and why it brings children from all different skill levels.

In the first week, Nowlin said four of the campers returned after attending last year, which makes for an easier week of teaching of course, but she also enjoys sharing her passion for horses with the children who have never saddled up before. Oftentimes, horses become a passion of those children as well.

This isn’t limited to the summer either, Nowlin said, as during the school year, she runs an after-school program that runs for an hour and a half until 5:30 p.m. She teaches the same lessons to the cadets as she does with the campers during the summer because there are people of various skill levels as well.

“Some of them come down here for therapeutic needs because the horses are very therapeutic to the kids and the cadets,” Nowlin said. “Others just come down here because they have a passion for riding. We go down through the creek, and we let the horses play in the water. There are different levels back there of the trails we can ride. There are some that have a lot of steep hills so they have to conquer their fears over all that stuff.”

Nowlin said the campers are eager to ride on the trail and do some trotting, which they learn near the end of the week.

“We do learn how to trot by the end of the session. I think they all enjoy that the most.” Nowlin said. “We have a lot of fun doing (the camp). I try to make it fun for the kids.”