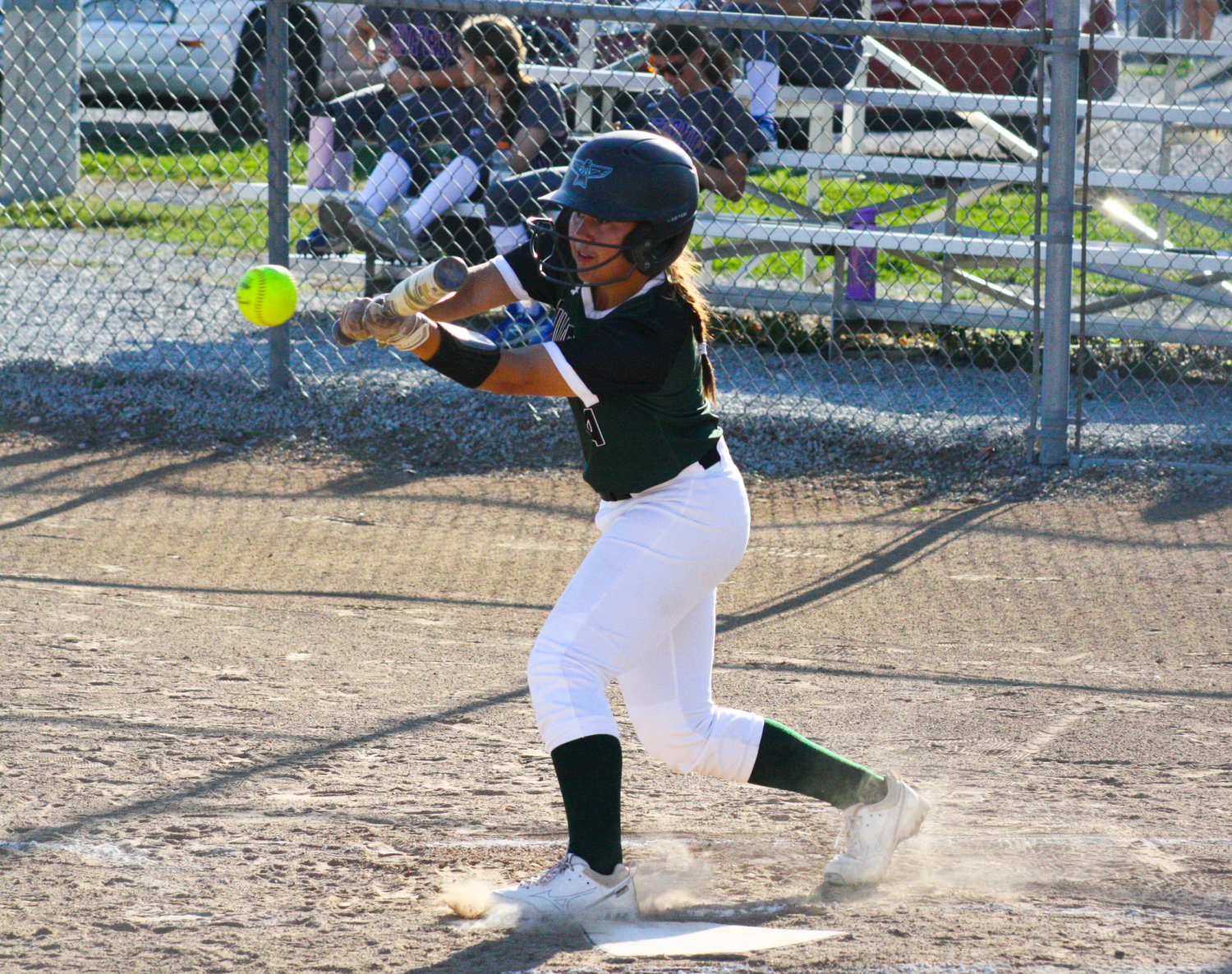 The Ladybirds played their second non-conference game in as many days under a scorching sun and were able to scorch the ball at the plate, defeating California 7-2 and notching a victory against a team that had lost five games going into the day, with three happening against state-ranked opponents. Freshman Kymorie Myers and sophomore catcher Abigail Schmidt each had three RBI as the No. 3 and 4 hitters, respectively. Jalyn Leible added an RBI from the No. 2 spot, and leadoff hitter Corynne Miller went 3-for-3 with two runs and two bunt singles.

Head coach Mariah McKee said North Callaway was more selective at the plate Tuesday compared to Monday’s 16-4 home loss to Class 3 No. 7 Hallsville. The Ladybirds were swinging at fewer bad pitches, only striking out once in the fifth inning rather than 10 times against Hallsville. She said it helps when the No. 3 and 4 hitters are piling up the RBI as well.

“My hitters came through and got me some ribbies,” McKee said. “It was just really good to see them put stuff together instead of just spacing out here and there.”

California picked up four hits against Lauren Speight that turned into one run in the first inning, but North Callaway had the immediate response in the bottom half of the inning. Miller bunted for a single and Leible walked to set up an early RBI opportunity for Myers. She lined a single that scored the tying run prior to Schmidt doing the same to give the Ladybirds a 3-1 lead.

Seven straight Lady Pintos were retired by Speight until they broke through with a run in the fifth inning. Just like before, North Callaway set the table for Myers and Schmidt in the bottom half of the inning.

California pitcher Gabrielle Rohrbach had two of her three walks in front of Myers, who hit a home run in two of her previous three games. She smoked another pitch past the infield, but she couldn’t jog this time. Myers sprinted into third base with a two-RBI triple — her first career three-bagger — prior to Schmidt picking her third hit and third RBI for the 6-2 North Callaway lead.

“It’s just nice having her in the three hole,” McKee said. “Anytime she makes contact, you know it’s going to be solid contact. Even if it’s straight to somebody, it’s still going to be hit hard. Knowing that and being able to have my first getting on base, that’s big.”

Miller provided the spark to both of the three-run innings for the Ladybirds as she reached base all four times she dug in. Whenever the Lady Pintos’ defense fielded the ball on the infield, it was much too late as Miller had already zoomed past the first baseman.

The junior leadoff hitter has a .382 batting average this season and has maintained a .500 average in her previous seven games.

“That girl has been seeing the ball like a beach ball,” McKee said. “In the last week and a half, she has done so well at the plate. It helps when your leadoff can get on, and you got your speedster on base and you can really make things happen with her speed. It makes defenses nervous when she gets on because they don’t know what she's going to do.”

Defenses are nervous before Miller even leaves the box, McKee said, because of her ability to bunt. McKee said, when the defense is playing back, North Callaway will take those bunt singles, and she instructs Miller to simply “pick a side.”

Speight missed the sweet spot of bats for most of the night, initiating many weak pop flies. Two of them were lifted backwards in the fourth inning, making Schmidt throw off her mask to make plays. She snagged one on a dive in the foul territory on the third base side, earning a hug from her pitcher after the inning.

Those were the only errors the Ladybirds had as a clean game plus a six-run first inning culminated in a 12-3 Eastern Missouri Conference victory at home.

Corynne Miller led off the game with a bunt single that was immediately eaten by the Montgomery pitcher Maddy Queathem, and she finished 4-for-5 with two RBI, two runs and two stolen bases. Olivia Knoepflein went 3-for-4 with an RBI, and Kymorie Myers was 2-for-3 with a walk and hit by pitch.

Lauren Speight allowed one earned run on nine hits in seven innings while not walking anyone. Queathem allowed 10 earned runs on 15 hits along the way of pitching all six innings for Montgomery County (4-11, 1-6 EMO) while going 2-for-4 with two doubles at the plate.

North Callaway (5-7, 4-2 EMO) plays in the Versailles/California Turf War Tournament with its first game being a 10:30 a.m. rematch with California, who they defeated 7-2 on Tuesday at home. Montrose is the Ladybirds’ second opponent to determine which bracket they will compete in — either the championship one in California or the consolation in Versailles.

The first set belonged to North Callaway on Thursday. The rest of the match was a different story.

The sophomores shined for North Callaway as Bailey Hill and Avis Endres each led the team with eight kills, and Natalie Shyrock followed with six kills.

The Ladybirds earned their second three-set sweep of the season after winning by scores of 25-6, 25-18 and 25-14 at Chamois.

“It was a huge team effort while senior Alana Todd led the way with three blocks,” head coach Andrew Klein said. “Sophomore Lakyn Hartley had four kills along with an outstanding performance by junior Riley Blevins at libero.”

North Callaway (4-8) plays Centralia (5-3) at 9:45 a.m. to start its run in the Hallsville Invitational today. The Lady Panthers have won 12 straight sets.