NC ROUNDUP: Thunderbirds rally off injury, pull away late 30-12 at home against Louisiana

The Thunderbirds were there for each other Friday night against Louisiana.

North Callaway hosted the Bulldogs, defeating them 30-12 to earn its first Eastern Missouri Conference victory this …

NC ROUNDUP: Thunderbirds rally off injury, pull away late 30-12 at home against Louisiana 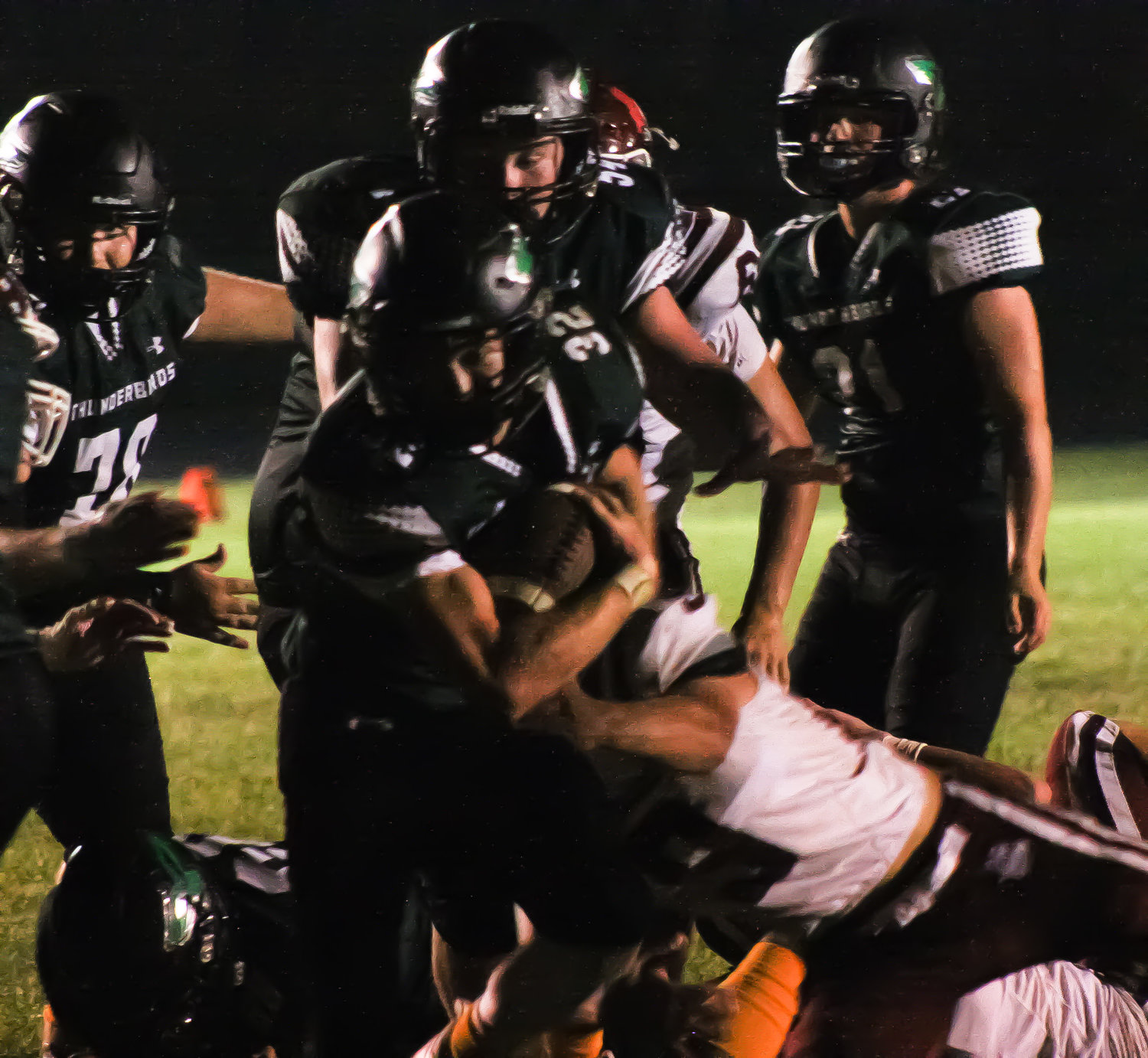 The Thunderbirds were there for each other Friday night against Louisiana.

North Callaway hosted the Bulldogs, defeating them 30-12 to earn its first Eastern Missouri Conference victory this season. The Thunderbirds outscored Louisiana 16-6 in the fourth quarter, with all of those points happening after around the six-minute mark.

Around that time, junior running back Riley Humphrey – who had 119 yards rushing on 16 carries for the bulk of the team’s season-high 273 yards on the ground – had to spend about 30 minutes lying on the field. He was stretchered off to an ambulance by the field, with North Callaway ahead 14-12.

The Thunderbirds were ahead 14-0 after the first quarter before encountering a “lull,” head coach Kevin O’Neal said, that saw the offense go empty-handed on five straight drives since senior AJ Siegel ran it in from two yards in the first quarter. They had three turnovers on downs, an interception and a lost fumble. After seeing their teammate on his back for so long, O’Neal said the Thunderbirds rallied together to close the game strong.

“(Riley) was running the ball hard with an attitude,” O’Neal said. “He got hurt and went down. I saw our team respond in a positive way. We’ve talked all year about playing for the guy next to you as much as you play for yourself. I think they took it to heart those last two drives.”

Junior Tucker Wright took all the handoffs after the injury, finishing 65 yards on 15 carries. Quarterback Braydn O’Neal pounded in the touchdown to cap a 14-play, 70-yard drive for his second rushing touchdown and give him 85 yards on 13 carries. After Louisiana fumbled the kickoff to give North Callaway a short field on the 34-yard line, Wright ran it from four yards for the 30-12 lead with about a minute left.

Kevin O’Neal said Wright stepped up in a big way in the fourth quarter, contributing to the strategy of running up the middle North Callaway employed late in the game.

“Tucker stepped up,” O’Neal said. “We talk about it all the time: Take advantage of an opportunity when you get it. Tucker took advantage of his opportunity. I could tell when I looked at him that he was ready to take over there at running back, and he did a great job for us.”

O’Neal said Wright and Humphrey both had an effective offensive line Friday and “a different mentality.”

The second quarter is when Louisiana started moving the ball with its heavy running attack with fullback Kenny McCormick under center for most of the night. Brady Sheppard ran it the Bulldogs’ first touchdown after North Callaway failed to convert on fourth down in its own territory.

McCormick completed three passes but his third was the biggest for either team as he hit Sheldon Silvey on a 35-yard pass up the middle, putting pressure on the Thunderbirds to score.

“Those drives where we didn’t get points, a little bit of that is one me trying a couple different things to adjust what they were doing defensively,” O’Neal said. “We didn’t quite execute – Braydn was a little bit off with his passes and we dropped some balls tonight that we don’t normally drop. They did a good job getting after Braydn and making him move around. We just weren’t quite sharp for the second and third quarter.”

North Callaway goes back on the road on Friday to Mark Twain (2-2, 1-1 EMO), who won 50-18 at Montgomery County in Week 4. O’Neal said the Thunderbirds will continue in their quest to “control the line of scrimmage.”

“We talked about trying to control the line of scrimmage, and I thought we did,” O’Neal said. “We didn’t do it the best tonight, but we did it when we needed to.”

The ball kept flying out of North Callaway’s field in Auxvasse on Monday.

North Callaway lost 16-4 in six innings against Class 3 No. 7 Hallsville in a game where the teams combined for five home runs — a field record. The Lady Indians hit three long balls while the Ladybirds had home runs off the bats of Kymorie Myers and Jalyn Leible.

Hallsville (13-2) took a 4-0 lead after one half inning prior to Myers popping her second varsity home run over the fence to score three runs. Leible led off the third inning with a home run, but Hallsville scored in every inning except the fourth inning.

“We played with them. We did a good job at the plate,” head coach Mariah McKee said. “Even when we struck out, it was a 3-2 count so we worked the pitcher.”

The Ladybirds committed 12 errors in the two games they played Saturday at the Cairo Softball Tournament, losing 6-3 to New Bloomfield and then 7-5 to South Callaway to exit the bracket early. The miscues allowed nine unearned runs to cross the plate and for North Callaway’s opponents to come back after the Ladybirds scored in the first inning.

Freshman Kymorie Myers led the offense, finishing 3-for-6 with four RBI and a two-RBI home run in the first-round game against New Bloomfield. Ella Slater was the only Ladybirds with a hit besides Myers in the New Bloomfield game, and Faith Cash had two hits in the South Callaway game.

Myers hit her first varsity home run — a two-run shot — to give North Callaway a 2-0 lead in the first inning against New Bloomfield. The Lady Wildcats scored three in the bottom half of the frame and one in each of the next three innings to back pitcher Peityn Thomas, who struck out 11 in six innings.

Myers had a hand in giving the Ladybirds an early lead against South Callaway as well, driving in two runs on a laser single, making it 3-0. The Lady Bulldogs matched that total in the bottom half of the frame and plated four in the fourth inning after the Ladybirds took a 5-3 lead against McKenzie Laughlin, who struck out seven in six innings.

North Callaway’s Pressley Schmauch was just a touch behind her medal-winning times earlier this season.

Schmauch ran Saturday in the Fulton Invitational, taking 32nd place with a time of 23:42.49. The top 20 finishers earned a medal, but Schmauch has won two medals previously at meets in Mexico and Linn. At the Mexico meet, she finished 14th with a time of 23:39.00.