Of utmost importance to Paris is maintaining a level playing field. 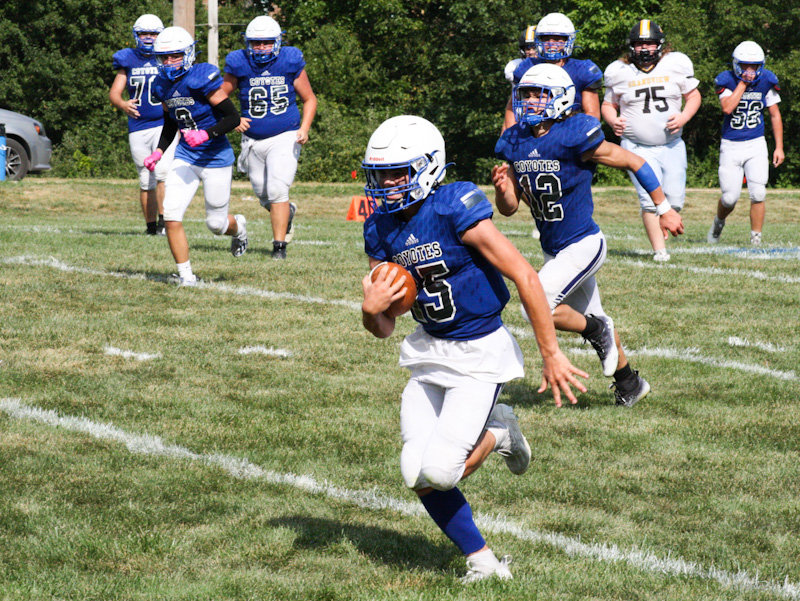 Paris junior receiver Colton Kendrick breaks free from the secondary during the Coyotes' home game Aug. 27 against Grandview. It was the opening game of Paris' final season as an 11-man football team as the school board approved the switch to 8-man at last Wednesday's meeting.
Jeremy Jacob Photo
Posted Wednesday, November 23, 2022 1:24 am
By Jeremy Jacob, Sports Editor

Of utmost importance to Paris is maintaining a level playing field.

The Class 1 school decided at last Wednesday’s school board meeting to move from 11-man football to 8-man starting next season. School enrollment and player safety were among the reasons cited for making the change.

Athletic director and former head football coach Gary Crusha said he and high school principal Chris Willingham outlined the pros and cons of transitioning to the 8-man game, which at least spans as far back as 1988 in Missouri when the first 8-man state champion was crowned and has a presence in more than 30 states. Crusha said the question had been asked for about three or four years prior to now. The decision was official as a way to level the playing field for the Coyotes, which saw about 30 kids show up for the program this year.

“There really wasn’t a lot of reasons why we shouldn’t (switch to 8-man),” Crusha said. “Basically, we were talking about a level playing field as far as numbers of student-athletes in our building and on our teams. Transitioning to 8-man football, we’re still 15th-smallest school out of 40 schools. It just made sense.”

Over the years, Crusha said Paris has had to play many freshmen and sophomores to fill holes left behind by smaller rosters and injuries while other schools in Class 1 have been able to keep juniors and seniors in the varsity game. Having so many younger kids on the field against kids that are further along physically and mentally is not ideal.

Crusha has 26 years of football coaching experience — 19 as head coach — and has believed strongly in the 11-man game. In his 11 years as Paris head coach prior to Joseph Utterback taking over this season, Crusha has continued to believe that even 20 kids was enough but said his position has “softened” based on how much Class 1 has changed.

“It’s not the same Class 1 we used to play in,” Crusha said. “Monroe City, South Callaway, Brookfield — all those schools were Class 2 schools not too long ago. The trend is it’s going to get worse if more schools would drop down. Typically your Class 2 powerhouses are going to start being Class 1.”

Monroe City, and its roster of 88 kids, eliminated Paris by defeating the Coyotes 62-6 in the first-round of districts in what was the first step of at least a Final Four run this year. Crusha said it was noticeable how outmatched Paris was in that game and the school’s declining enrollment numbers have made it harder.

When he started in the district 12 years ago, Crusha said Paris High School had 177 kids and is now around 130. He said small-school football cycles between having smaller and bigger rosters, which was sufficient for the Coyotes’ survival in the 11-man scene until Class 2 schools moved to Class 1 and made it so Paris had difficulty competing with those particular schools every season.

“I want to see our kids have more chances of success than what we have,” Crusha said. “I want to see them be able to compete day-in, day-out.”

Crusha said he has had conversations with Utterback about the transition and each of them are in the same boat. They had never watched 8-man football before but have been doing much research in the past few days.

Utterback said the primary differences are a shorter and narrower field as the dimensions are 80-yards along by 40-yards wide compared to 100-yards by 53 1/3-yards in 11-man football. As implied by the name, each team has three less players on the field at any given time, with two linemen and a skill position player (such as a running back or wide receiver) being on the sidelines on offense and typically a linemen, linebacker and defensive back are absent on defense.

Utterback said these differences lead to the game becoming more focused on speed and offense as teams have regularly scored at least 40 points — all four semifinalists this year scored that much in this past weekend’s playoff games to earn trips to the Final Four, with first-year 8-man school Sweet Springs defeating St. Paul Lutheran (Concordia) 62-40. He said North Shelby is expected to join Paris and the other eight schools in the Lewis and Clark Conference next year and the Raiders will bring in the distinction of being part of the highest-scoring game in MSHSAA history. In 2019, North Shelby and Pattonsburg combined to score a state record 180 points (92-88 North Shelby win), and four of the top five of most combined points in a game were 8-man contests.

“It has a lot more to do with speed,” Utterback said. “Defense seems to be more of a challenge because once you break past the secondary, it’s just over. You’re gone. It can be good because it makes the games more exciting.”

Utterback said MSHSAA has rebalanced Class 1 and 2 usually after the small schools decided to switch to 8-man, which puts a team like Monroe City in the position to face Paris this year. He said the Coyotes had roster concerns all year but never ran out of total kids but rather ran out of upperclassmen, expressing the same safety concerns of Crusha. Only eight Coyotes played in all 10 varsity games this season, Utterback said, so Paris moving out of 11-man, where it was the second-smallest school out of 64 teams, is a relief.

When it pertains to the specific workings on the field, Utterback said there is much room for learning and he and his players are in this unprecedented situation together. He said he spoke with his kids Thursday while also sharing a letter with the community that talked about how there is going to be much change with 8-man, but the central vision for Paris football remains the same.

“We still think that every kid is going to come out of high school better if they’re part of our program,” Utterback said. “There is still a place for every kid in this high school on Friday nights, whether it’s on the football field, or as a manager, a cheerleader, in the band or in the stands. That stuff stays the same.”

Utterback has been told the 8-man community is “close knit” and is looking forward to studying film and doing more research to fully understand the finer details of 8-man. Some of the Coyotes on next year’s roster are also mostly looking forward to it, Utterback said, and expects the skeptical ones to come around when they learn more about it.

“Some of them were very, very excited. Our junior high guys, who are going to be our sophomores and freshmen next year, they played an 8-man game in junior high against North Shelby and they won that game,” Utterback said. “Some of our older guys see this is going to help our school and it’s going to be geared more toward us. Some of them weren’t so excited about it. It’s going to be a learning process for all of us, trying to get on the same page. As I do more research and hear from more people, I think there’s more to be excited about so those guys that aren’t excited, I think they have plenty of reason to be excited.”

All-conference running back and defensive back Gatlin Fountain, receiver and defensive back Colton Kendrick and athletic linemen such as Reid Ragsdale, Brandon Callison and Evin Reichmann are some players Utterback said should fit the faster 8-man game and make up a projected Paris roster that is “well-suited” for that type of football.

Utterback echoes Crusha’s feelings in that this change is what’s best for the community and that there hasn’t been as much negative feedback following the announcement. They also both think the central concepts of football are intact.

“Football is football,” Crusha said. “You still block, tackle, run the ball, throw the ball, catch the ball, and tackle. It’s the same as far as the concept of skill level.”