The Lady Coyotes ended their day being shut out for the second time this season but what a day it was already. 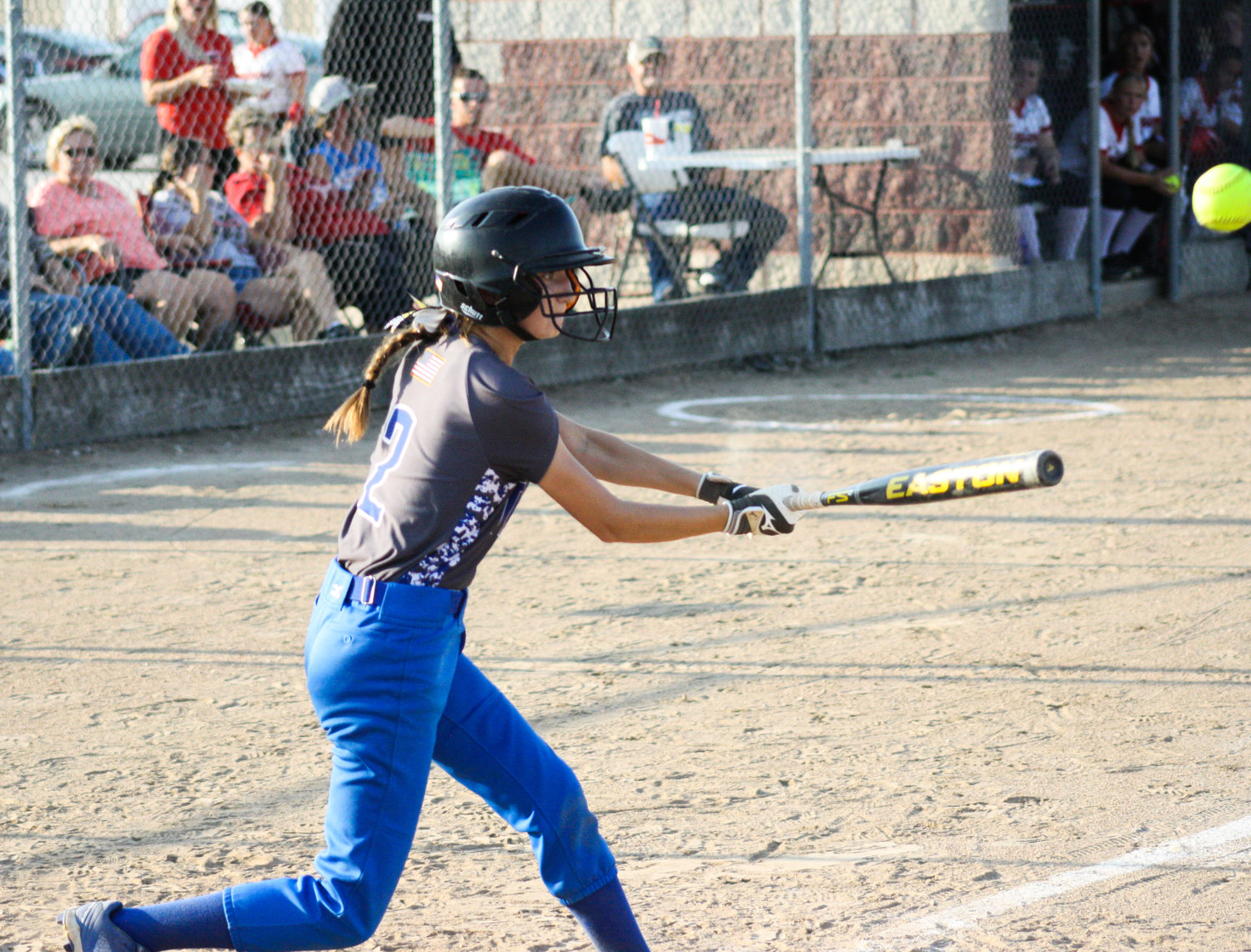 Paris freshman third baseman Sophia Crusha makes contact Sept. 14 against Community R-6 in Laddonia. Crusha had five RBI while going 4-for-7 for the runner-up Lady Coyotes at the North Shelby Tournament. She had a 5-for-5 night with three RBI in a 15-6 win at Bevier.
Jeremy Jacob Photo
Posted Tuesday, September 20, 2022 10:44 pm
By Jeremy Jacob, Sports Editor

The Lady Coyotes ended their day being shut out for the second time this season but what a day it was already.

Paris lost 12-0 in the championship game of the North Shelby Tournament on Saturday to the host Lady Raiders but defeated Linn County 10-8 and Lewis and Clark Conference foe Scotland County 6-4 to advance that far. Pitcher Kennedy Ashenfelter allowed eight earned runs in her 14 innings pitched during the day, but all of those runs were allowed against North Shelby. She struck out 13 and walked three.

Kennedy Ashenfelter and Crusha had big games at the start of the week in a 15-6 victory at Bevier, with Ashenfelter striking out 13 in seven innings and Crusha going 5-for-5 with three RBI. Shoemyer and her sister, Jaclyn Shoemyer, contributed four and three RBI, respectively, against the Wildcats.

Paris moved to 7-8 overall and was 0-2 in conference before traveling to conference foe Marceline on Monday, hosting Scotland County in a rematch Tuesday and staying home to face Glasgow today.

Paris beaten by big play, not composure in 36-0 loss at Harrisburg

After a passing onslaught last week, Paris’ secondary had another challenge Friday.

The Coyotes lost 36-0 at Harrisburg to go 0-2 in Lewis and Clark Conference matchups this season. The defense allowed three touchdown passes by Salisbury quarterback Ryan Binder in Week 3 and surrendered the same number this week to Trace Combs.

Combs threw for 109 yards on 6-for-9 passing, complementing a 210-yard day on the ground for Harrisburg. Paris was able to complete four passes for 34 yards and was limited to 118 yards of total offense. Drew Williams ran for 65 yards on 23 carries. Owen Totten finished with three sacks and three tackles for loss, Reid Ragsdale had 14 tackles and Gatlin Fountain added 11 tackles.

Head coach Joseph Utterback said while the previous two weeks have been losses for Paris, he thought the Coyotes were better mentally than in Week 3.

The first-year head coach Utterback said it is important to him to establish a culture to turn around the program – one where the players endure through the bad and good times. He said he wants Paris’ success to change much like Harrisburg’s program made a U-turn.

Four years ago, Harrisburg finished the season 1-9 – the fourth 1-9 season in five years – before hiring 40-year coaching veteran Steve Hopkins in 2019. Since then, the Bulldogs haven’t had a losing season.

Utterback said he remembers Hopkins coaching when he played in high school and even recalls learning a zone-blocking exercise called the “Hoppy drill,” involves players moving in a zig-zag pattern. The name is derived from Hopkins himself, which amazes Utterback and inspires him to make a lasting impression on his players.

“I have a lot of respect for coach Hop, and I always have,” Utterback said. “To find out one of the drills I ran in high school that I’m now teaching to our players that he taught 20 years ago, it’s a funny deal and it’s a testament to him.”

Harrisburg ran one in to take a 6-0 lead after the first quarter before the Bulldogs started taking chances in the second quarter. Whenever pushed back in the red zone, Paris’ defense first allowed a 14-yard touchdown pass to Austin Darwent – that was followed by a two-point catch by him – and then a 23-yard strike from Combs to Darwent again.

Paris was down 22-0 at halftime that turned into more at the six-minute mark of the fourth quarter. Combs aired out a 35-yard touchdown pass to Braden Wyatt before a running score capped Paris’ second 36-0 loss to Harrisburg (3-1, 2-0 L&C) in three years.

“I thought our defense played tremendous,” Utterback said. “Our D-line especially, we have a lot of leadership up there. Our defense put us in great positions. Our offense just really never got anything going. Our first three possessions were three-and-out. We weren’t letting them put points on the board (in the first quarter), but we weren’t putting points on the board.”

Paris (1-3) returns home Friday looking to avenge a 35-0 loss to Westran (1-3, 0-1 L&C), who lost 21-18 at Fayette in Week 4, from last season. Utterback said he doesn’t “circle big dates on the calendar” to focus on the next game, but Friday’s home game has some importance to him as he played for Westran and spent his first year of coaching there.

“I’m a Paris Coyote now, but I got my start at Westran, and I know all of those dudes and they’re good dudes,” Utterback said. “It’s kind of a weird deal seeing all the people in the stands that you’ve known for a long time, but it’s fun at the same time.”

Landen Chapman was one of three Coyotes that ran in the 5,000-meter race Saturday in Mokane but still finished near the top.

Paris’ Chapman finished ninth in the South Callaway Invitational with a time of 20:10.43 to bring home a medal.

Riley McKinney gave Paris some representation near the top of the standings Monday.

At the team's home meet Monday, McKinney shot a 58 to finish fourth out of 15 golfers from four schools, including the Lady Coyotes, Westran, Glasgow and Southern Boone.

Westran's Vallie Schermerhorn was the medalist after shooting a 51. Glasgow's Macie Parks and Southern Boone's Alice Mauney followed with respective scores of 53 and 56.

Miranda Billings had Paris' next best score at 66, and Maddie Heinecke shot a 72.

Paris competed in the Harrisburg Scramble on Tuesday.